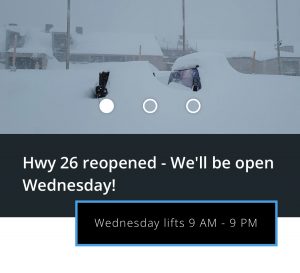 Widespread snow showers today from the Pacific Northwest, down to the northern Sierras, to Utah and Northern Colorado as 2 waves bring more snow to the west and Rocky Mountains.

This is the last storm of the Active West part of the Pattern. The storms will take a northern track for the next few weeks until the first week of February. There are a few exceptions, I will talk about what to expect during the Northern Part of the Pattern tomorrow or Thursday.

In Cycle 1, back on Nov 6th, this system came through exactly as it is coming through now.  Two separate waves of energy, moving in the same way, on the same path–that’s the Pattern. 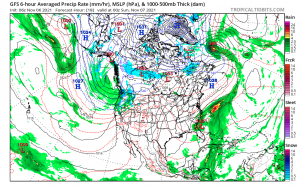 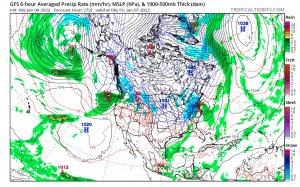 I will admit that once the storms cross the Rocky Mountain range and get in to the smooth, flat parts of the country, it is hard to pinpoint where they will go. 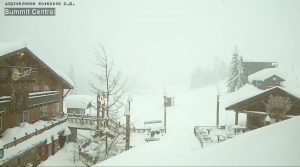 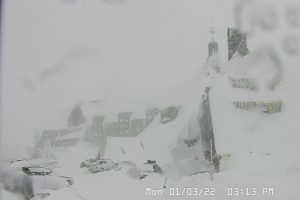 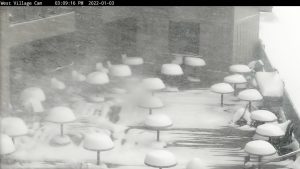 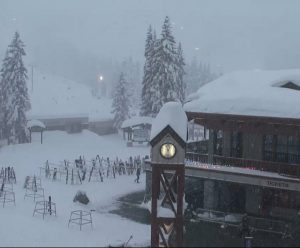 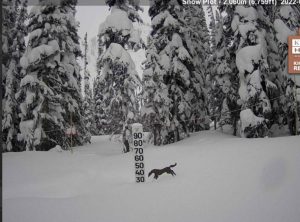 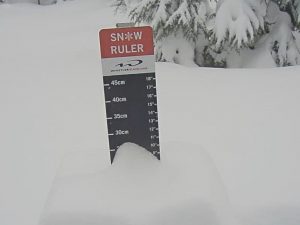 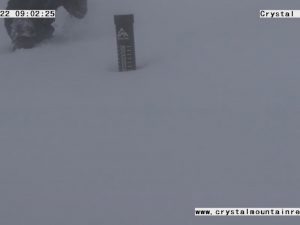 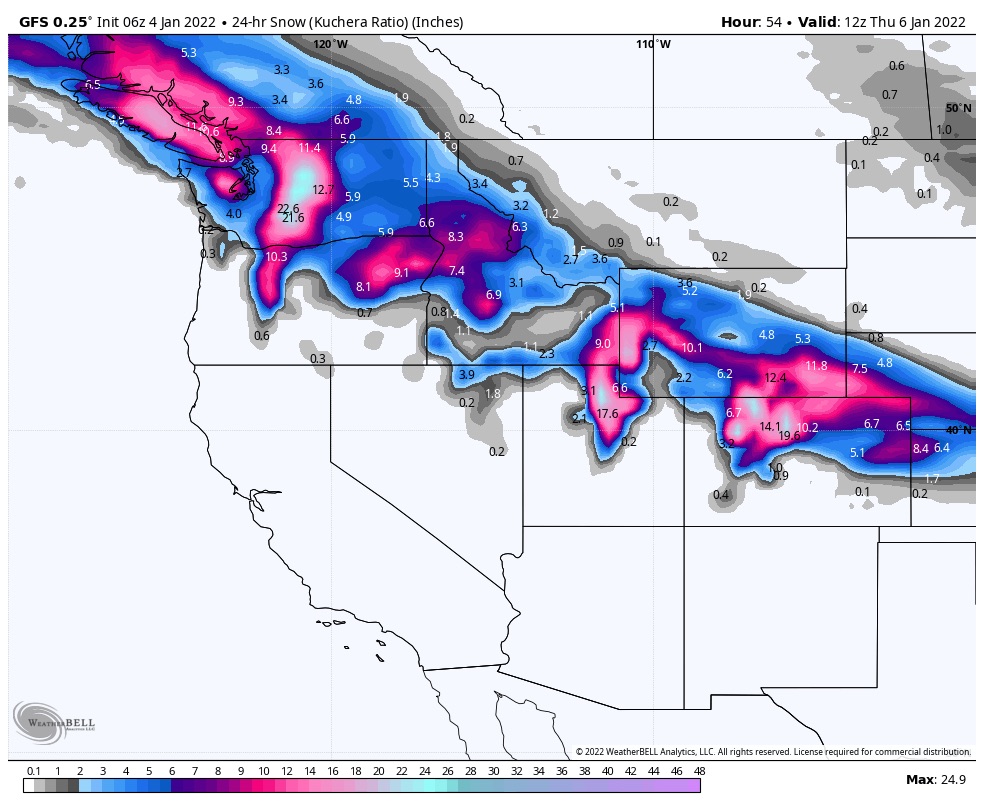 A nice snowy day in the northern Cascades with light winds and good temperatures (windchills in low teens).  6-10 of fluffy powder today with slightly higher totals for areas east of Seattle, like Stevens Pass.  Stevens has had bad luck so far this year.  There snow Stake cam looks like it belongs to Charlie Brown–clumpy, wet snow and usually misshaped.

Southern Cascades will have heavy snow with warm temps, around 30.  Light winds but rising snow levels are back, rising today to 4500 feet.  Snow totals should be in the 1-2 foot range.

Tahoe is back in the game today, at least the northern part.  Expect 3-6 this morning and another 1-3 throughout the day for resorts along the Crest like Donner, Sugar Bowl, and Alpine Meadows.  Not much to the south or east.

Northern Colorado with resorts on, or north of I 70, will get snow later today, around 3 pm.  Low temps in the evening hours as the storm cranks to full strength.  Snow totals in the 8-12 range with more for the northern mountains with higher totals for Steamboat 12-16.  Central mountains will get a little less with totals ranging from 5-10.

Northern Cascades:  Light snow throughout the day on Wednesday getting heavier by evening.  Heavy snow overnight with temps around 18 degrees.  Snowfall range between 8-12.

Southern Cascades:  Warm temps and high freezing levels will be a problem tomorrow.  Freezing level will start the day around 2000 ft but rising thru the day to 8500 ft–yikes.  Get your turns in early.  Reload for Thursday as a mix of rain/snow probable.  Colder temps and lower freezing levels on Friday.

Maybe 1-2 tomorrow, not much as bulk of the system stays north, then bluebird skies and warm Thursday.

Main part of the system during the day and evening Tomorrow with another 15-20 expected.  Warmer temps but still good with highs around 24 at the base (8,530 ft) with blower pow up top!  Storm moves out by Thursday mid-day.

Another good couple of days with 4-8 for the central and northern mountains both Wednesday and Thursday, more for the Boat (Steamboat). Back-to-back Steamboat surprise?

Temperatures on the warm side, though, around upper 20’s to lower 30’s.  Southern mountains, like Telluride and Silverton may get in on the action Wednesday, but probably not much 1-3.