Is This La Nina Different? YES 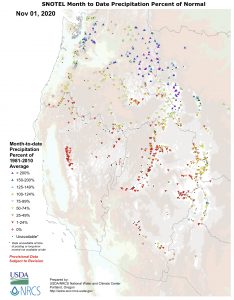 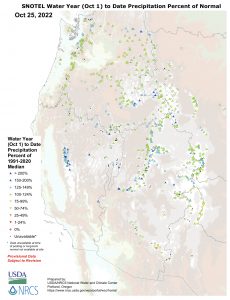 Look at these two charts……it’s only 25 days into this water year (water year runs from Oct 1 to Sept 30) but it’s a good sign for Lake Tahoe and most of the west.

When you look at the first chart, from 2020, you see the pattern of blue Snotel stations, moving from northwest to southeast.

Looking at the current water year to date, the precipitation pattern is spread out evenly. What does that mean?  It could be an anomaly, it is not a very large sample size, but it may be more indicative of this year’s pattern.  Luckily, there are a similar number of storms in this year’s pattern, as last year.  Just more condensed.

Since late July, the new pattern has been setting up and the cycle length went from the mid 60’s down to the mid 50’s.  The storms have shuffled into the new cycle length eliminating the “northern part of the pattern” from last year.

The Northern Pattern was a 21 day stretch pattern with little precipitation for the CONUS.  The storms and precip stayed north of the border. Now that that part of the pattern is gone and it’s cycling without that dry stretch, the storms are condensed into a tighter cycle.

This La Niña is a little stronger than both 2020-21.  La Niña’s are measured by 3-month averages.  Looking at the chart, JAS stands for July-August-September.  NOAA has forecasted La Niña to continue thru the winter with a 54% chance of neutral conditions by February.  You can find their latest summary here.

There is a strong correlation between El Niña Southern Oscillation (ENSO) and the amount of snowfall.  In La Niña years the atmosphere produces less while El Niño years produce more, on average.  The Pattern (LRC), is perhaps the catalyst of everything.  I am not sold yet, that it is, but it is definitely more of a factor than all of the other teleconnections—Artic Oscillation (AO), Quasi Biennial Oscillation (QBO), Antarctic Oscillation (AAO) North American Oscillation (NAO), Madden Julian Oscillation (MJO) etc.

When we look at the amount of precipitation we have had so far, albeit a small sample size, we can project more of a normal winter with normal precipitation for Tahoe, Utah and Colorado.  I think the Pacific Northwest (PNW) will still be above normal.  Looking at the New England and Mid-Atlantic resorts, conditions should be similar to last winter.

The National Oceanic and Atmospheric Administration (NOAA) has issued their winter forecast.  They are calling for the “drought in the Great Plains and parts of the West to expand”.  You can find that article here.

Below are charts that are from NOAA’s winter forecast.  You can see that western areas, such as Tahoe and California, are in the expanding drought area.

This forecast is likely wrong, because we know the new pattern.  The brown you see in NorCal down to Tahoe, then over to Utah and Colorado will likely improve.  While the central CONUS plot is likely correct, with the exception of Minnesota, Nebraska and northern Iowa. 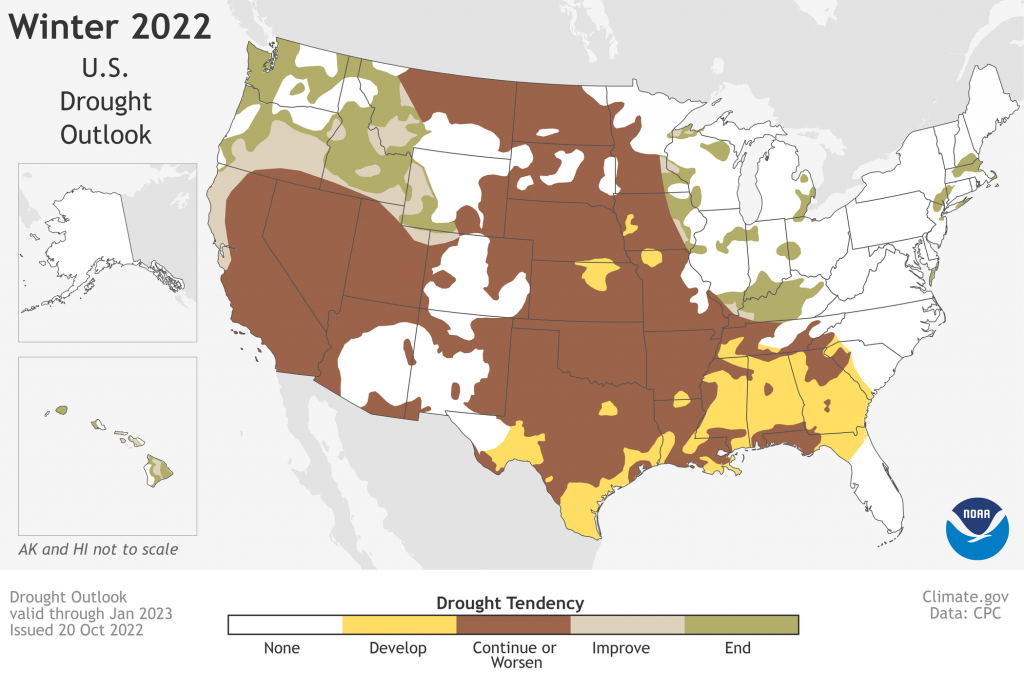 The precipitation map needs a little work.  I have added lines that are pattern based.  It’s not a bad map, they have this one pretty close, just need to tweak it a little.  BTW the Gulf of Alaska is going to get hammered this year, so if you ever wanted to go to Alyeska, this would be the year.  They will have an Alaskan Trifecta.  I will plot their storms in the first set of predictions.

BTW, the second BTW, Hawaii may get hit with a Hurricane next year.  We will keep an eye on tropical indications, and we will have an official Hurricane forecast in the spring.  As of now, it’s a strong possibility. 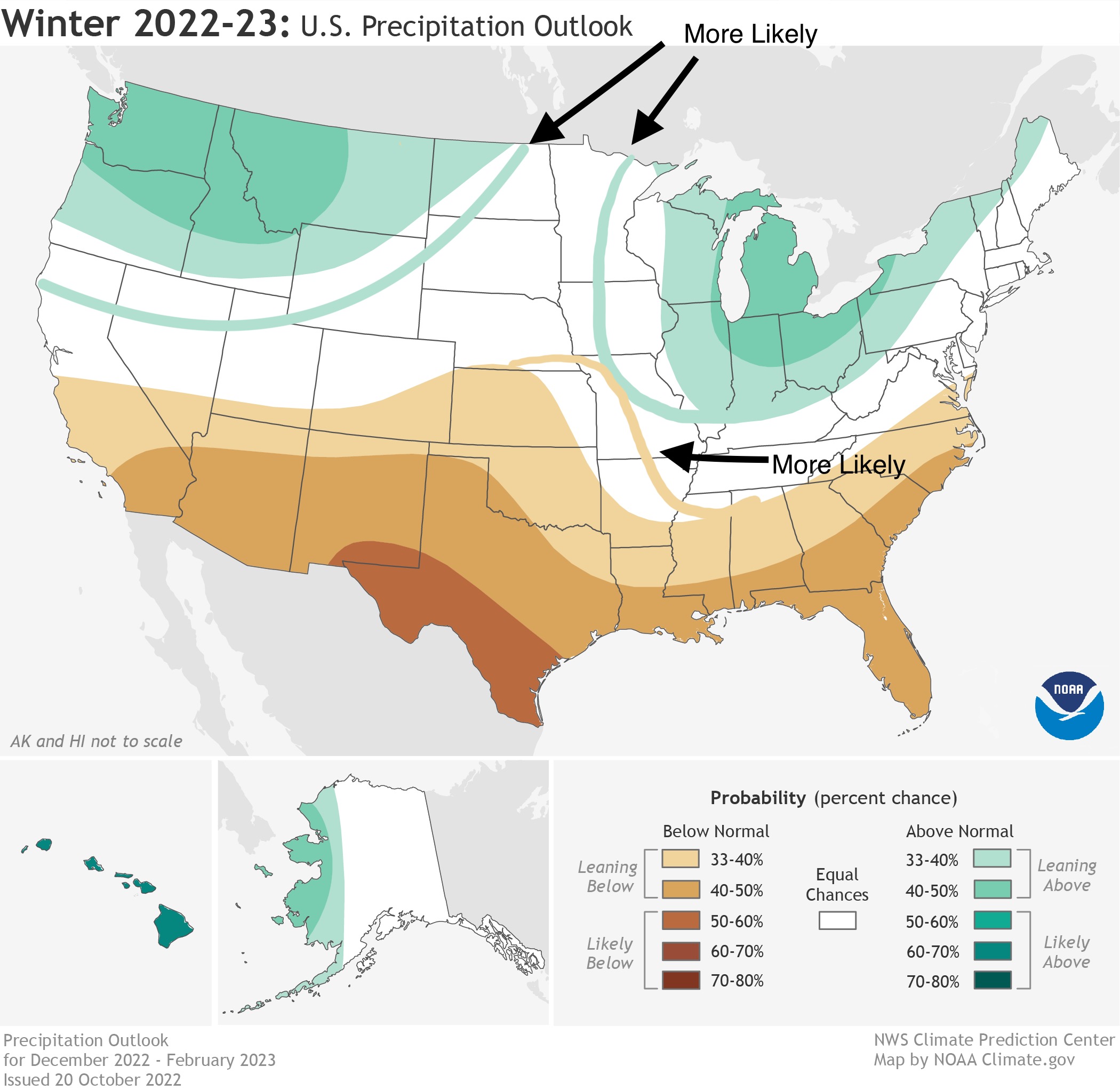 Below is the NOAA temperature forecast. Of course, it needs a little work too. I’ve added a couple of lines that are more likely, based on the pattern.

There will be more troughs that will dig along the coast of California, than their models are predicting.  Much like when we have predicted storms, 40, 50, and 60 days out, their long-range models don’t see what we see.  Their models are based on La Niña averages and current model data projections. 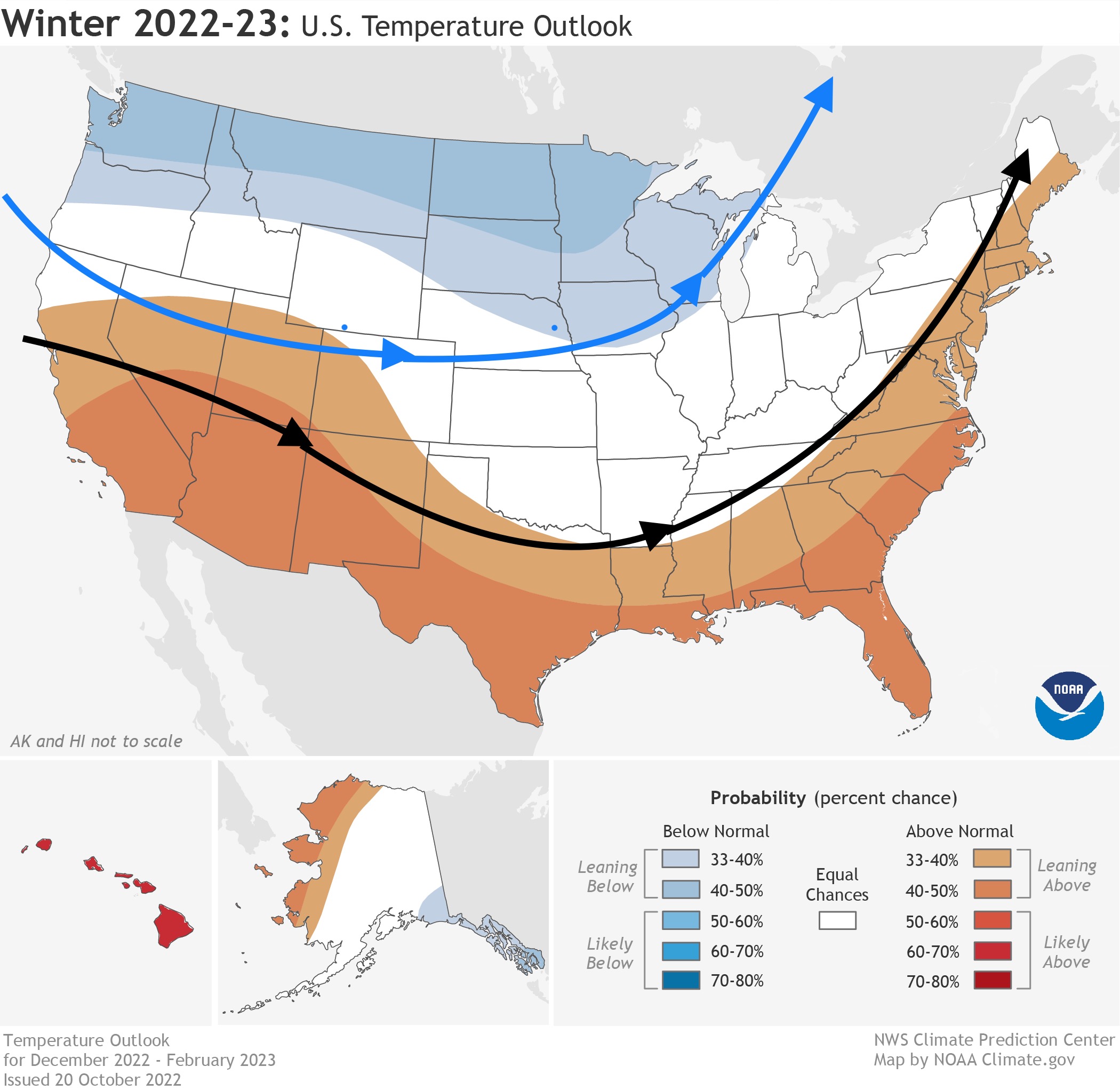 It’s going to be a better winter than last year.  I could be wrong, like last year I thought it was going to be better for Tahoe than it ended up, but I thought that before I realized how long the cycle length was.  Those 21 extra days were a killer for the Sierra.

Below is the storm track for the next couple of systems along with our test run of system dates.  Our predictions are right on so far, we will continue to monitor the track and timing of the storms and very soon we will have what we need to post those first set of predictions.

Thanks for reading!  We have been receiving a lot of emails and comments–keep them up!  I love bringing this new technology to you–the FuturesNow for modern weather forecasting.  Those other outlets rely on technology that can only predict the weather 7 days out.  FutureSnow, 30, 40, 50, 60……and if that hurricane hits, a year out.

Send email to Mike@FutureSnow.co or comment below. Thank you! 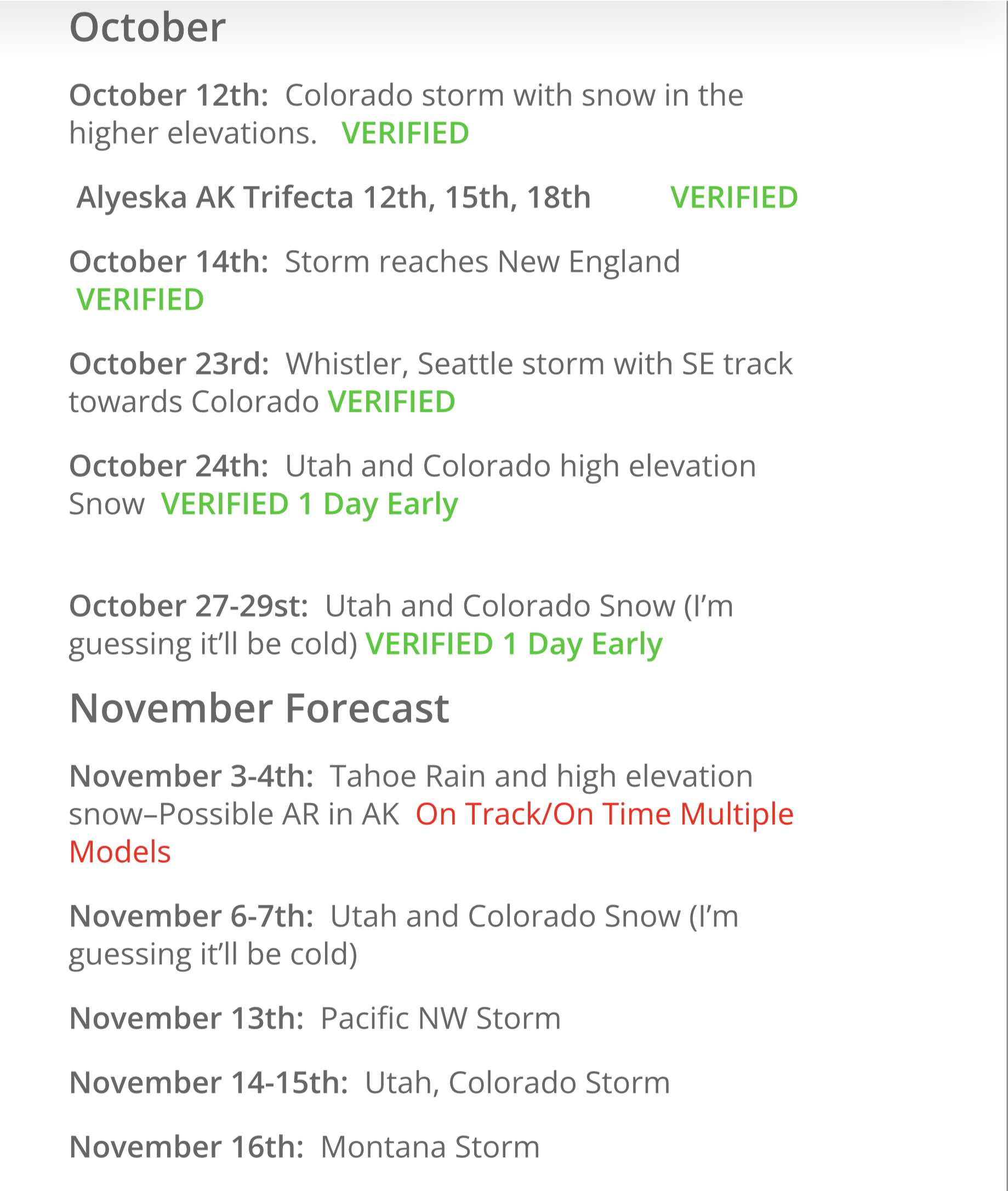