By Mike HolmDecember 28, 2021No Comments 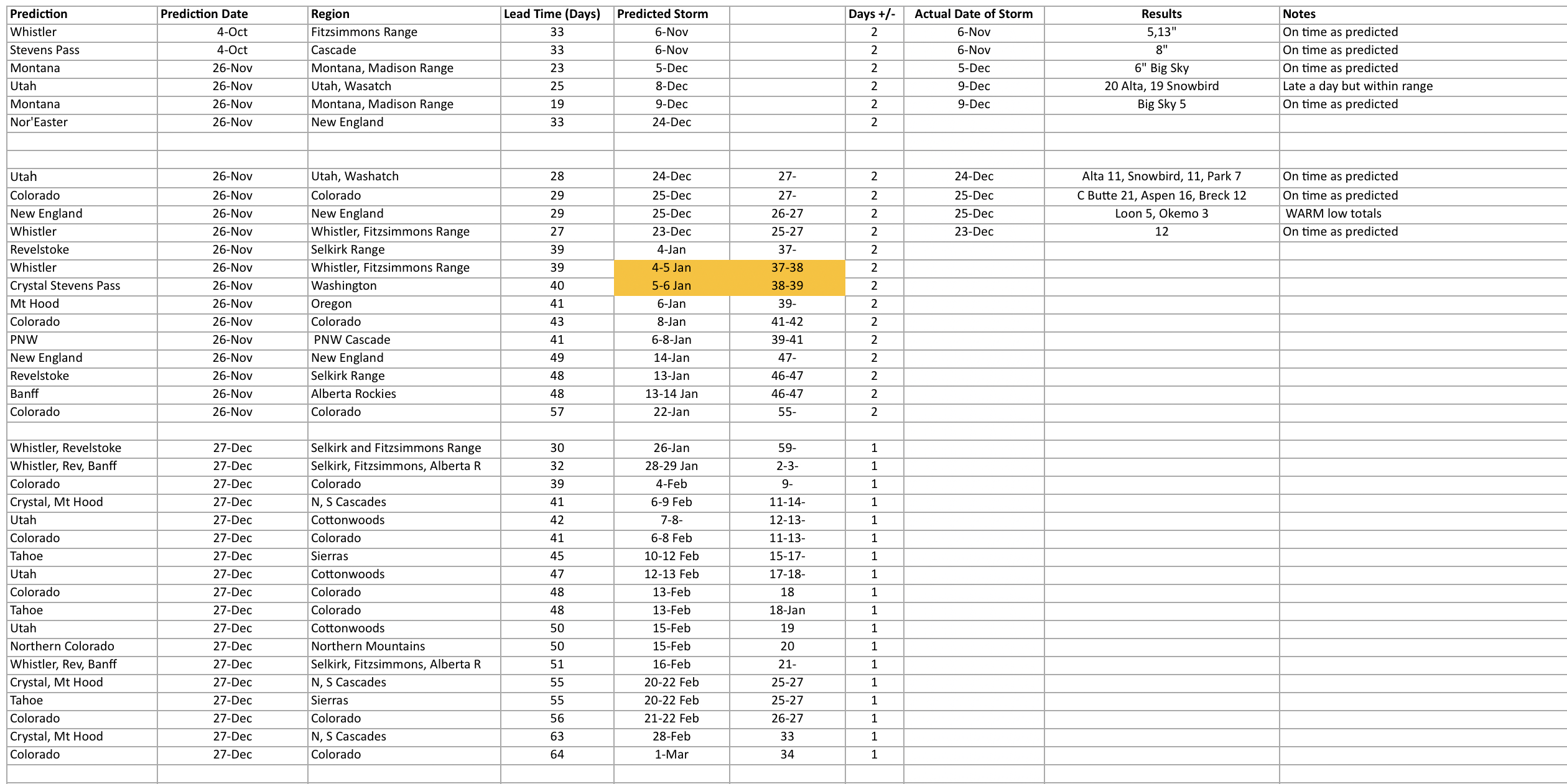 Predictions are out thru March 1st.  We are currently 9 out of 9, a perfect record so far, so good start. There are 10 predictions left from the original set of 16. These next set of 20 range from January 26th thru March 1.  I will put out a Spring Break specific blog in the next week or so, so you can plan on to go where the snow is.

Obviously, the Pacific Northwest is the place to be this year, you can’t go very long without it snowing.  In fact, out PNW calendar could be used for knowing when it’s NOT going to snow.  The longest break without snow is 5 days in February–I probably screwed something up.  A commenter on the Tahoe Daily Snow (Bryan Allegretto), for Open Snow, said that the “PNW is so large that it could always be snowing somewhere”, so I thought I would clarify that the intended location of the calendar is for Washington and Oregon.  Although it can be used for British Columbia.  In my Predictions spreadsheet, I do call out specific storm’s tor areas like Whistler Blackcomb, Revelstoke and Lake Louise/Banff National Park.

Spring Break will happen during the Northern part of the Pattern, but there are a couple of storms decent storms that occur on March 19 and 23rd, days 52 and 56 of this year’s 59-day pattern.  Those locations are in Utah and Colorado, so be thinking Alta, Snowbird and Park City for Utah, and Telluride, Vail and Aspen for Colorado.  Days 52 and 56 occur January 19th and 23rd.  We will need to verify those locations to be sure, but we will get some model guidance around Jan 10th. 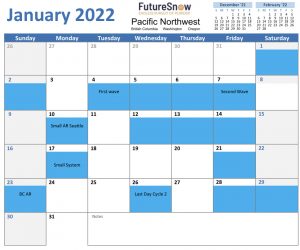 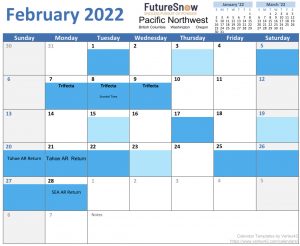 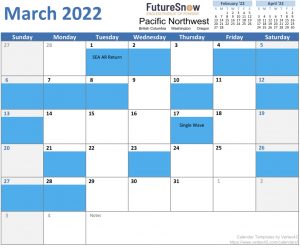 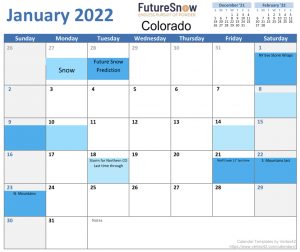 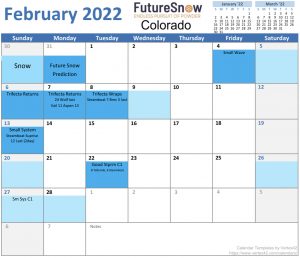 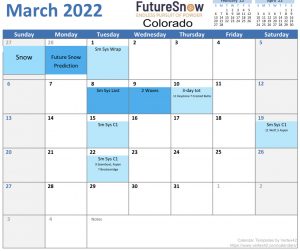 PNW
Bluebird skies in the Northern Cascades today, Temperatures in the single digits in the morning with a high around 13, with light winds.

Southern Cascades has a chance of light snow, not much accumulation expected.  Highs around 20 with light winds.

Tahoe area finally gets a break from the snow today, to dig out and get mountain operations restored.  Tahoe made national news for the third time this year because it was in the center of this big storm, the atmospheric river event October 24th, and don’t forget the Caldor fire last summer.

Most resorts are closed due to the severe nature of storm–wind, blizzard whiteout conditions and avalanches.  Highway 50 is back open, but there are avalanche warnings everywhere and they are still looking for a missing skier from Christmas, so if you go out be extra careful.

Snow likely this afternoon as the next wave in this system moves through.  It is a weak wave, so just a few inches of fresh pow to top off the weeks haul.  Very cold and light winds, 10-15 mph and wind chills in negative territory.  Hey its Utah, its cold.

Snow today for all mountains.  Cold temperatures and windy with gusts over 30 mph.  3-5 inches for most mountains with the southern mountains of Telluride and Silverton with slightly more.

The Cascades get a break, as a weak system passes through.  Not much snow out ot this one, maybe a couple of inches.  Light winds and cold temps.

A weak system passes by tomorrow, not much snow expected 2-3 light winds.

A break from the snow Wednesday morning and afternoon as the next wave moves in Wednesday night. 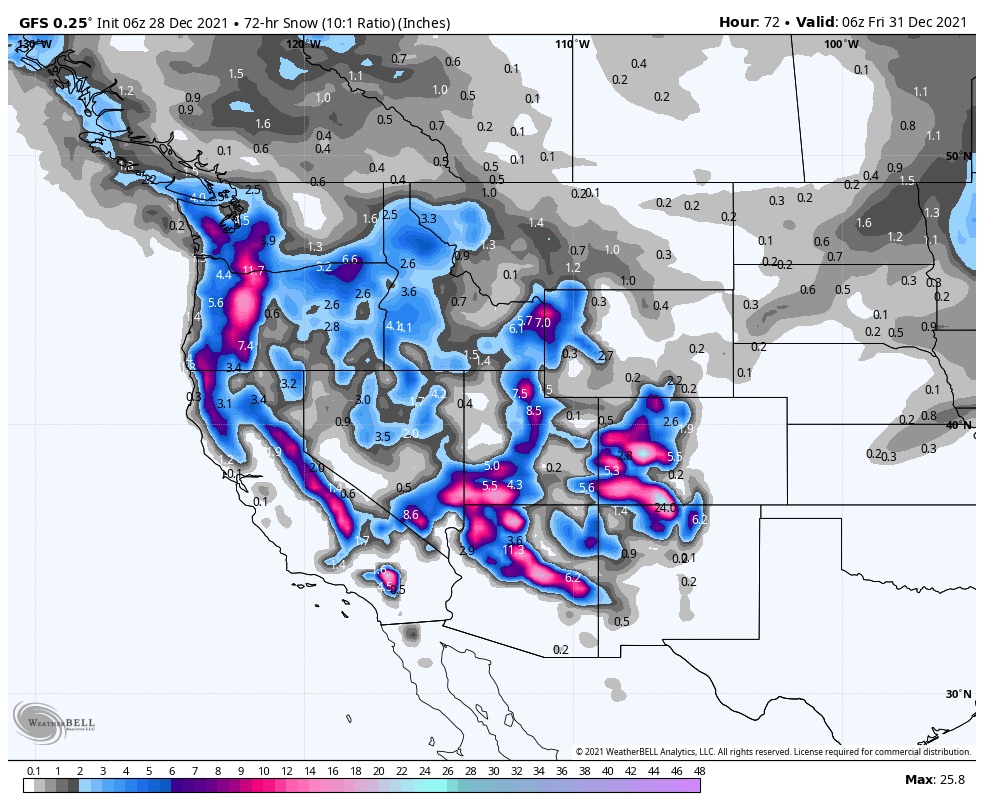