More Great Snow From A Series Of Pacific Storm Systems

By Gary LezakJanuary 12, 2023No Comments

Storm systems are lined up again!  The weather pattern is cycling according to the LRC. We are sharing with you the difference in meteorology, the difference in getting your weather forecasts for your ski trips and so much more!  I’m Gary Lezak, contributing to FutureSnow!

The storm systems just keep coming with little to no blocking over the eastern Pacific. We do see some blocking forming within the next two weeks, and as you will read in this blog the LRC forecast for February is looking just as stormy.  Here is a storm from just after the new year: 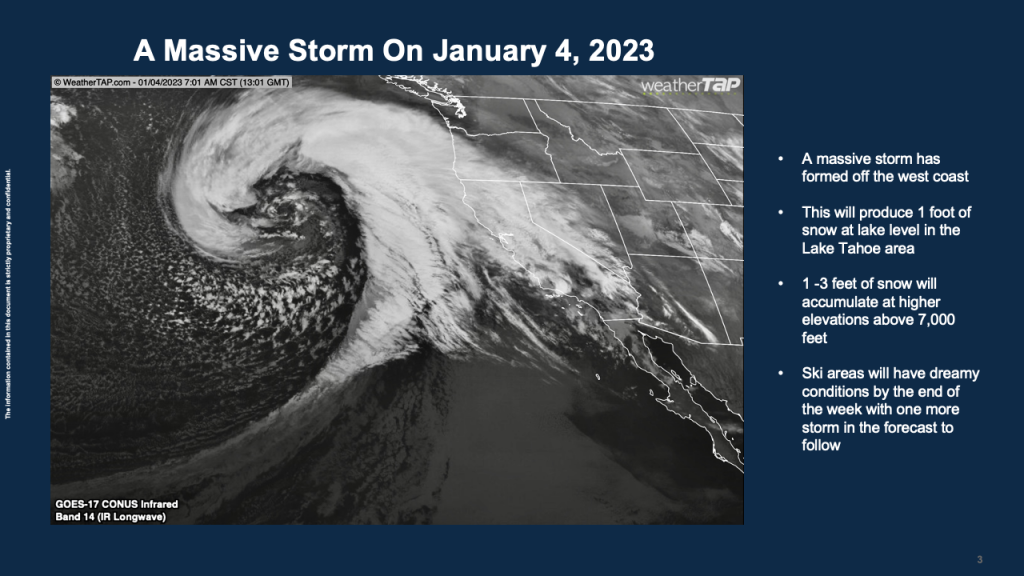 And, here is the storm coming in Friday with more to follow, shown below: 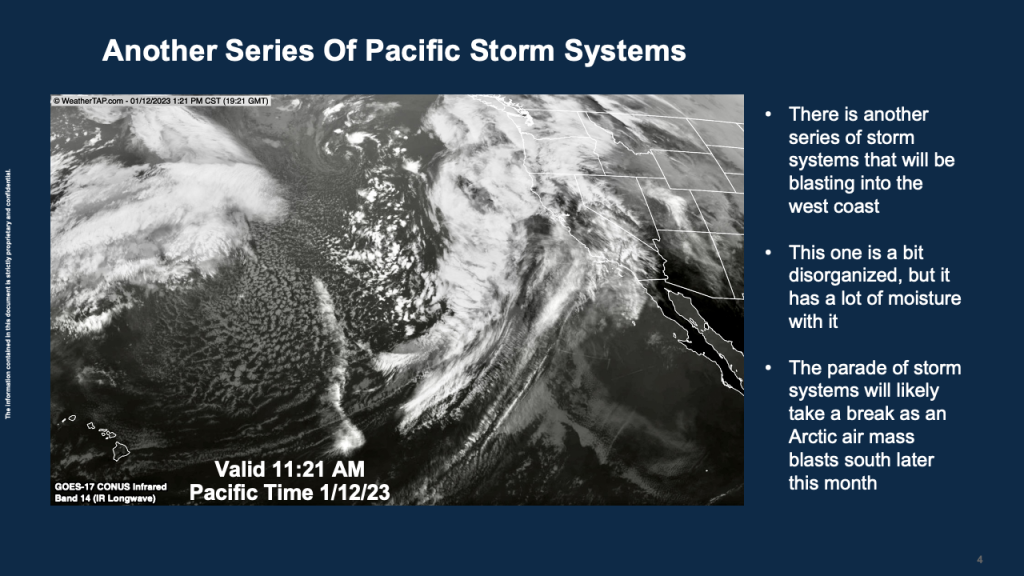 The LRC-Model was just updated. This is a patent-pending model that is the difference in meteorology. It is a global model and it is as accurate at 100-days out as your 7-day forecast is on your weather app.  It is likely more accurate at 100-days out.  How is this possible?  The LRC is the centerpiece of a huge atmospheric puzzle. It shows that there is order in what most meteorologists think is just chaos. 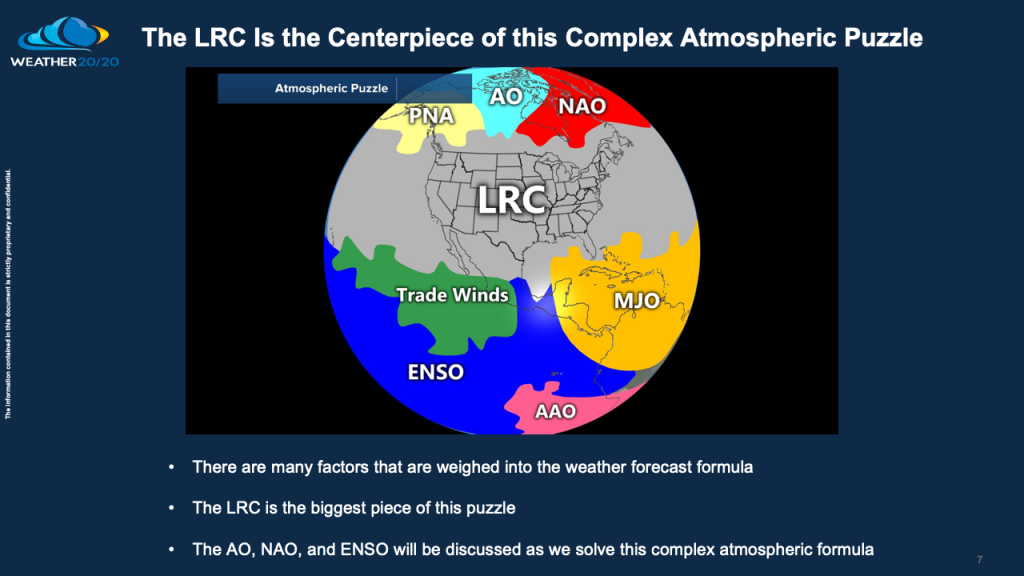 We are moving into the third cycle of this year’s pattern.  Look at what the model is predicting for late January and February: 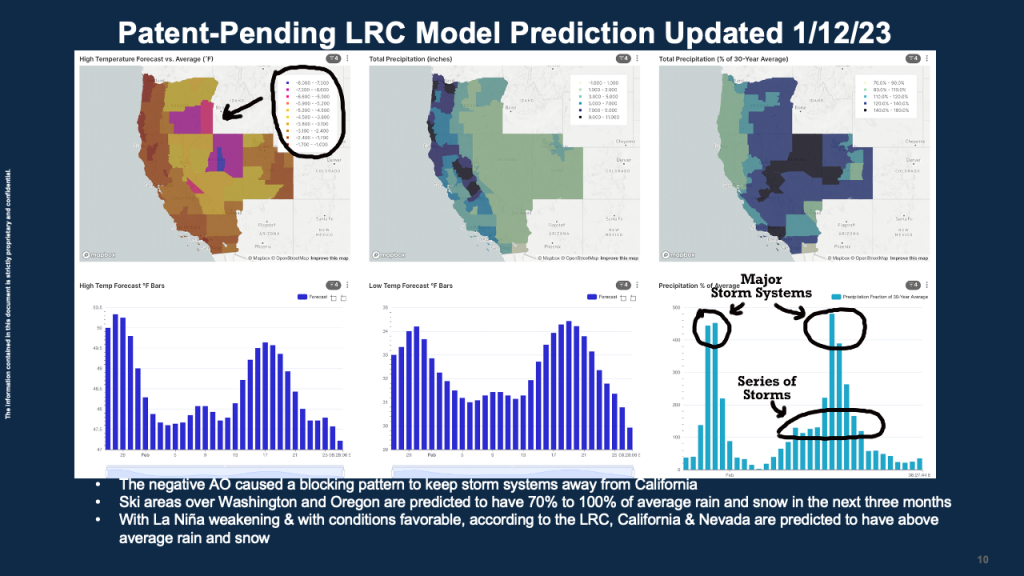 I circled the temperature anomalies on the upper right picture. This shows that the entire region is forecast to have below average temperatures, and most areas above average precipitation. This forecast was updated today, but it is actually a prediction from late November.  The bottom right graph shows another two-week series of storm systems around mid-February. This will continue to create great skiing conditions and some travel problems. 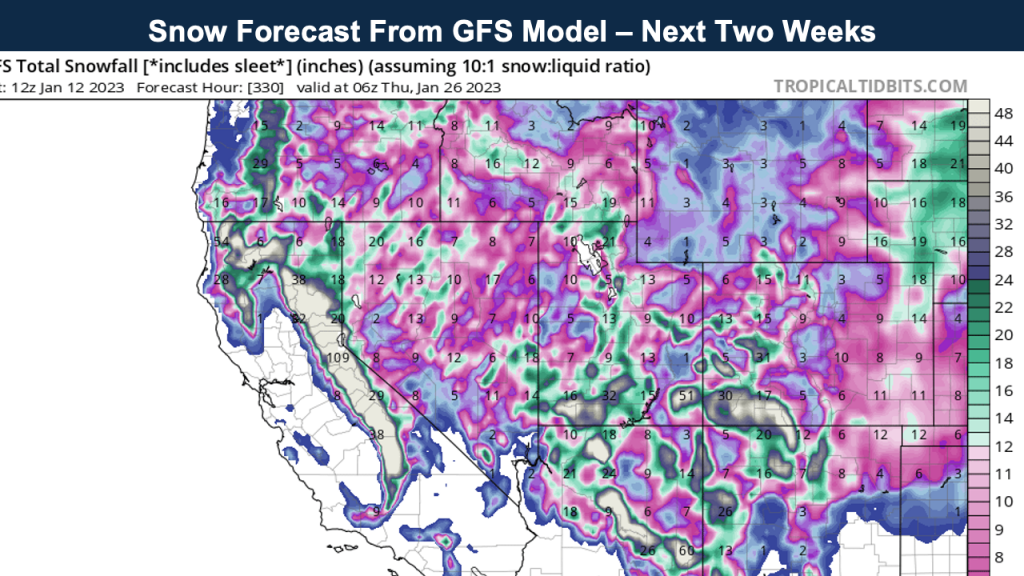 This next map, above, shows 109 inches of snow on those western slopes of the Sierra Nevada range.  There is a good chance of widespread 5-foot snowfall totals with some of those favored western slope locations having the potential of 10 feet of snow in the next two weeks.  So, from Mammoth Mountain north into Northern California and the Pacific Northwest and east to Utah and Colorado, it is looking like a huge snowpack will allow for some late skiing this year.

What happened? I thought it was La Niña? Wasn’t it supposed to be dry out west this winter.  Not according to the LRC.  Let’s use South Lake Tahoe as an example.  I have been forecasting for the Tahoe area for years. The first sign of a good winter for snowfall is to analyze what happened in the first LRC cycle.  This year, we used the LRC to predict this great snow season for California based on how the LRC set up, and how storm systems starting hitting.  South Lake Tahoe had two feet of snow in November, in the first LRC cycle.  The LRC-model ran for the first time this season in late November and it predicted above to way above average precipitation and colder than average temperatures. The LRC then goes a level up and predicts when storm systems will hit and accurate 1-day to 300-days into the future.  So, La Niña is only an influence.  La Niña is still in progress, and yet it turns out that we are experiencing a great ski season out west!

Thank you for sharing in this snow forecasting experience.  Have a great weekend and we will keep you updated.